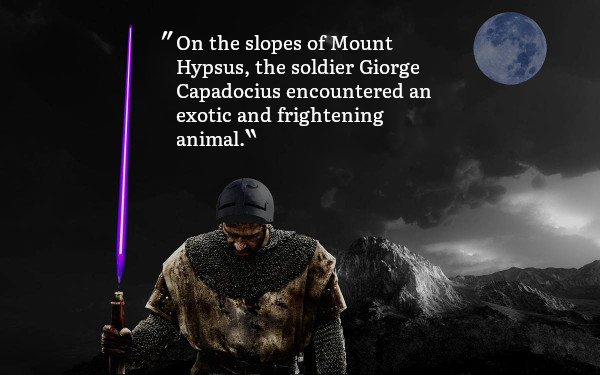 “On the slopes of Mount Hypsus, the soldier Giorge Capadocius encountered an exotic and frightening animal. Giorge was an ordinary warrior, devoid of nobility titles, someone who had long since given up hope of leaving his name to posterity. Yet, he held the desire to be remembered by at least one single act of service to the community. The beast, on the contrary, was nothing short of unusual. With huge wings and dark skin covered with scales, strong legs like those of a lion and reptile head, it terrified travelers, barring the passage of those who tried to cross the land by taking a shortcut through the highlands. It was the responsible for a number of deaths and disappearances. Giorge came along a narrow path, walking carefully as the sun hid behind the tallest peaks when the beast showed up unexpectedly. It stood over the path, preventing the soldier to flee sideways at the risk of falling off the cliff, or turning back, showing his back to the beast. It approached the warrior’s face until he felt the blow of its breath. It then explained a single question would be asked and he would survive providing the correct answer. The animal lifted its neck and looked down, using a menacing tone, ’What do humans and meckos share, and I, the lord of Hypsus, do not own?’ At a glance, Giorge realized that, with some luck, he was presented with the opportunity to take a relevant action. And said, ’DNA!’ The animal did not say a single word. It shrugged its neck, lowering its head, covering the upper part of its chest with the forearms, and withdrew with respect, clearing the passage. Giorge, however, threw his spear, puncturing the exact spot the creature had tried to protect, causing its immediate death. A being devoid of DNA, thought the recently turned hero, was artificial and not protected by any of the prevailing life protection taboos. Besides, it had no defensible reason to attack travelers in the area. He had just served justice!”

This is the introductory part of Purpose, a science fiction book. You may read more, and purchase the book at Amazon Bookstore.